Ten more signs that you are approaching middle-age

Something strange happened to me last week. My blog exploded. I got more visits in one day than I normally get in a month (well three weeks to be exact.) After a bit of hunting I found out that my blogpost Ten signs that you are approaching middle-age was posted on The Afterword website by a nice person called Skirky. Thank you, Skirky and thank you to all who visited!

While I’m naturally delighted by all the new visitors, the best part was to read so many other suggestions for signs that you are approaching middle-age. So rather than keep these to myself, I thought I’d share them with you. A number of the suggestions have come directly from the comments on The Afterword, others were sent to me via Facebook and Twitter. I’ve even thought of a few more myself. Many thanks to everybody for the suggestions. I’ve named the individuals concerned where appropriate. If you think of any more, please feel free to add them in the comments below. Enjoy!*

1 The oof – Helena Handcart The oof is something familiar to all middle-aged people. It is the sound you make when you sit down on a sofa, or the sound you make when you get up from the sofa. Bending down to pick something up, or putting your shoes on elicits an oof; so does picking up heavy objects. It is a little known fact that the single biggest reason for people leaving the SAS is the oof. Not so good when you are creeping up on the enemy. If you make a funny sound when you sit down, it’s a sign you are approaching middle-age.

3 When your broad mind and your narrow waist change places – Twang This really doesn’t need any further explanation. Lovely phrase.

4. Parker Pens – Pencilsqueezer “If when those seductive adverts for life assurance flicker across ones consciousness and one finds oneself thinking “Ooo that nice Mr Parkinson wants to send me a free Parker pen, that would come in very handy for filling in the coffee break crosswords in Puzzle Monthly”. You are middle aged and can feel the chill hand of the Grim Reaper upon ones shoulder. It’s all Perry Como and slacks for you matey from now on.” – Thank you Pencilsqueezer, I couldn’t have put it any better 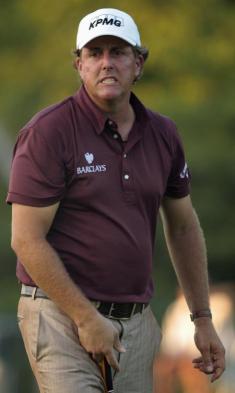 A fine figure of a sportsman

5. Golf Golf is the epitome of a middle-aged sport. For a start, you don’t require any athletic prowess. I saw a photograph of the winner of the open the other day and that man is not an athlete. In fact, looks more like somebody who’s been asked to take up a sport to get his cholesterol levels down. Then there is the fact it is based around going for a walk, a most middle-age pastime. Finally, and most damningly, there are the clothes. Slacks, a polo shirt and comfortable shoes. I rest my case.

6. You find yourself listening to Radio 2 – Emma For those of you not living in the UK, Radio 2 is the music station where youth presenters go when they get too old. It’s like the elephant graveyard of radio stations. Now I’ve been told many times by friends that I should give Radio 2 a go because “it’s much better than you think.” This isn’t true. Every time I’ve listened to Radio 2 the DJ has either been playing something by Andrew Lloyd Webber, or Keane. If you find yourself tuned into Radio 2 on a regular basis, it’s a sign you are approaching middle-age. As for me, I’ll stick to 6Music thank you very much (waits for the comments that 6Music is just another station for middle-aged music fans.)

7. You take up a sport to keep fit Many of you used to play sport for fun as kids. As you got older, some of you may have continued to play, but many stop, filling your time with other interests like going to the pub, or sitting in front of the TV. Then, as you approach middle-age, you realise that if you want to live a long life it’s not a good thing to be out of breath after walking up a flight of stairs. So you decide to take up a sport to keep fit. Notice the difference there? Not to have fun, but to keep fit. So now our parks have become clogged with fat, balding men, red faced and sweating as they try to complete a circuit. Our streets are filled with lycra wearing cyclists with arses so large they look like they are sitting on a stick. Finally, kids are forced to use just half the pool to go bombing or petting, or any of the other things on the poster, because some overweight 40 somethings in speedos need to complete their lengths. Don’t try to kid yourself that the urge to exercise isn’t age related, not even if you combine all three and enter triathlons. It is a sign you are approaching middle-age.

8. The allure of the caravan As you plan your summer holiday, you think back to the fun camping holidays you had as a kid. You want to do that again, possibly with your own children, to take them to the places you went. Then the reality bites. Camping is uncomfortable. Camping can be cold, or hot, or very, very wet. It may sound fun cooking on a little gas stove and sleeping on an air-bed, but after two weeks of this you’re likely to be in hospital or in a mental institute. That’s when your mind wanders to the caravan***. What could be better? You have all the fun of the outdoors, but with the comfort of indoors. It’s so practical, and a cheap way to holiday. What could be better? If your thoughts are heading this way, it’s a sure sign you are approaching middle-age.

9. You sneer at lists like this in the belief that they don’t apply to you because you are still too cool for school, but they do, maybe not every point, but somewhere deep inside it twists like a knife that you know you are approaching middle -aged conformity and there is little you can do about it

10. You overreact to criticism This may have something to do with point 9.

*Disclaimer: This list is not a comprehensive list of signs that you are approaching middle-age. If you are looking for a more comprehensive, evidence based** list of factors, I suggest you try the Diagnostic and Statistical Manual of Mental Disorders, by the American Psychiatric Association. Issue 5 has just been released. It’s a blast.

** This in itself is highly contentious. For more information read Jon Ronson’s The Psychopath Test. Fantastic book.