I know I said my post a couple of days ago would be my last and now I’ve posted two in one day, but how could I not celebrate Second Chance appearing in a Best of 2014 list?
Thank you Susan, both for your ongoing public support and promotion, as well as the behind the scenes encouragement you give that nobody sees. Have a wonderful Christmas.

I don’t normally do this – recap what I’ve read during the year and choose which have been the best books, but I was tired of scanning the Best of 2014 lists that media and book sites produce, seldom seeing anything at all I’ve read. So I decided to come up with my own list.

If an author has been featured on my blog, Reading Recommendations, I have linked to their promotion. And the benefit of writing this promotion blog is I have discovered and met so many great authors this past year! As well, I’ve heard from a friend, a reader, who has been following my recommendations – and reading many of them! Here’s what Violet has to say: I love to read. I read for pleasure but if I learn something, it’s a bonus. With thousands of books to choose from, it can be a challenge finding… 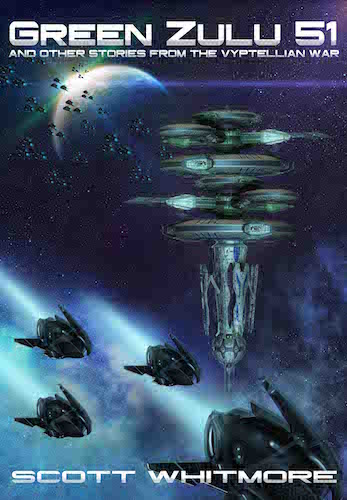 A war of millions is fought by individuals. For sixteen years humanity and the alien Vyptellians have battled in space and on hundreds of planets in a distant corner of the galaxy.

Tyko is a teenage space fighter pilot who has never known peace; insulated from the horrors of the battlefield, he’ll learn war isn’t a game. Sergeant Siengha is one of a handful to survive the war’s first battle; surrounded and vastly outnumbered by a merciless enemy, it takes everything she knows to keep those around her alive and fighting.

These are just two of the countless stories from the human side of the Vyptellian War. To those on the frontlines and their families at home, why the war began is unimportant, forgotten when the first shot was fired. What matters is the survival of the species.

But after years of bloody conflict, the war’s end is closer than anyone realizes.

I bought this book on the recommendation of Tammy Salyer, whose book Contract of Defiance I reviewed earlier this year. Tammy is a writer whose work I admire, so when she says something is good I tend to take her word for it and give it a try. For any authors who are yet to be convinced about the value of Paying it Forward, hopefully this is proof that recommending the work of others really is worthwhile.

Green Zulu 51 (and other stories from the Vyptellian War) is listed as a set of short stories set in a future world where one of old Earth’s colonies finds itself embroiled in a war with a relentless alien aggressor. Each story takes on an aspect of the war from a particular character’s perspective (a pilot, a soldier, a diplomat) but the further you read the more you realise that these aren’t just perfectly formed short-stories but form part of a larger narrative whole.

Whitmore has a wonderfully natural style, clearly bringing in a lot of his own military experience to the fore in painting the very ancient experience of life on the front line in a futuristic war. Each character has their own perspectives, are well rounded and immediately draw you into their world. While the battles (whether in space or on the ground) are well written and compelling, it is the human stories that make this book a stand out.

The influence of today’s conflicts on this book are clear, with once clear reasons for war becoming ever more vague as the years roll on and the attritional aspects start to take hold, but rather than take these parallels too far, Whitmore prefers to concentrate on how that impacts on the brave men and women who are tasked with carrying out orders, and their families, who have either started to question, or have forgotten the original reason behind those orders and the sacrifice they’ve been asked to make. Highly recommended.

Recommended reads are either independently published books – or those that are published via a small press – that I have bought and enjoyed. They are part of a commitment to ‘pay it forward’ to other independent authors by buying their work and promoting those that I have enjoyed, both here and on Amazon and Goodreads. I don’t accept submissions but instead focus on people who have helped or inspired me through their blogging or who actively support other writers, but I only recommend those books I have personally enjoyed. If you are an independent author I would encourage you to do the same and help pay it forward to the community. For more information please see my blog post here.