How to make an author’s day!
The first official review of Genesis Redux is in from Dave Higgins. Thank you so much for your kind words. Is it too early in the day to open the champagne? 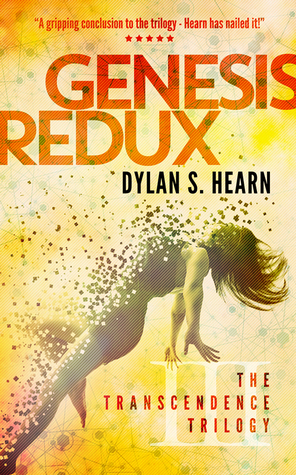 Hearne mixes complex, gritty politics with technology just beyond our own to create a dystopia that is both surprising and all too familiar.

This novel is the third volume in the Transcendence Trilogy. As such, the remainder of this data file poses a risk of corrupting the users surprise file for previous volumes.

Nico Tandelli and Mike O’Driscoll have been imprisoned by mysterious forces. Stephanie Vaughn is trapped in an unresponsive body. And the conservative faction of Global Governance are all but overthrown. But as Indigo reaches for the prize she has lied, stolen, and manipulated her way toward, it is snatched from her. As each struggles to break free, the secret battle for humanity’s future becomes open war.

As befits the conclusion of a trilogy, both the scale and consequences of the plot are larger. However, Hearne deftly avoids catastrophe for the sake of it; at its heart this…